Previously when I posted regarding the outrages I experienced during my MRT trips, many people visited my blog to read those posts. Today I witnessed a very touching scene on my short MRT trip from Hougang station to Kovan station on the Northeast line. The escalator down to the platform was under repair and an old couple, an uncle who was visually challenged and using a blind man's stick, as well as his wife, an old auntie who couldn't walk very well and was using a walking stick too, entered the MRT gates next to me.
Immediately a good Samaritan, this Indian guy, approached the old uncle and explained to him that the escalator was spoiled and that he would help him to the lifts. A MRT staff also came forward to apologize for the inconvenience caused. When the Indian guy told him that he would help the old uncle to the lifts, the MRT staff went back to the control station. The good Samaritan then proceeded to help both Uncle and Auntie to the lift, then to the platform and then into the MRT. He also sat next to the uncle and offered to help them when they arrive at their destination Dhoby Ghaut.
I briefly interacted with the Auntie as I realized she did not speak English and did not understand the Indian guy's explanation about the escalator. I approached her to explain the situation to her in Cantonese and later my baby played with her when we were on our train before we waved them goodbye.
Had the good Samaritan not been there, I would have offered to accompany them to their destination.
Anyhow, what I witnessed today serves as a reminder to us that we should not blindly discriminate against those prototypes. Everyone irregardless of race, nationality, age and sex has the capacity to contribute in a positive way to society. It pains me to see how netizens criticize and discriminate against foreign workers living amongst us. Personally there has been so many times that I have experienced kindness from a foreign person in a public place. We should celebrate these everyday heroes and more of us should act like them. A little consideration for others goes a long way. 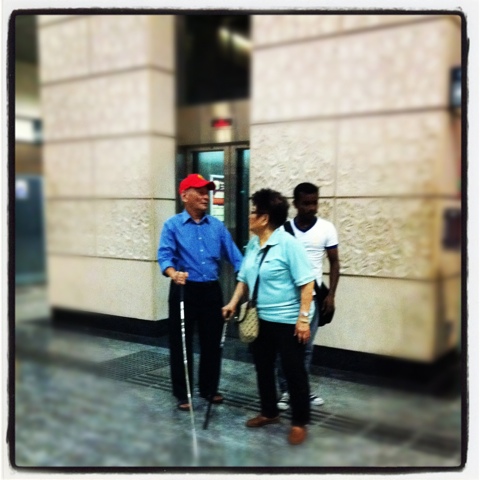