Why I Love Border Security d(^_^o)

I just can't get enough of this show which gives us insight into the day to day trials & tribulations of the customs & border security staff safeguarding Australia's airports, imports and postal services.
The most commonly featured and hilarious situation is that of Asians not declaring the food they are bringing into Australia. They would tick "No" to food but customs would find bags and bags of groceries, many times even prohibited items or concealments within food packaging to try and smuggle in tobacco & stuff. The funniest reactions are from the Chinese, Vietnamese, Indians and Malaysians. It's just uncanny how they try to get away with bringing so much food into Australia!!! Most end the drama with a fine between $100-$200 for forgetting to tick that box on the customs form which declares that you are bringing food into Australia.
The most intriguing and exciting situation is the stringent checks of people suspected of drug smuggling via their baggage, concealments on their body, or ingestion. The customs officers always perform frisk search after initial checks of baggage for traces of drugs and keen observation of traveler's reactions I.e. Nervousness, sweating, acting crazy or violent etc.
Then there is the educational situations of how customs identify and pull aside individuals suspected of trying to enter Australia using a tourist visa, but are actually coming to work or intending to remain in Australia thereafter as illegal immigrants.
Other interesting segments covered by the program from time to time include • the raids by customs on factories/houses/businesses suspected of using illegal immigrants or housing drugs
• Discovery of drug concealments or prohibited items in parcels/goods sent via post or imports
I was lucky to enter Australia via Sydney Airport during one of the filming sessions this time but unfortunately did not get to witness any exciting live action. If you've never watched this show before, do give it a go as it's great entertainment! Kudos to all customs and border security professionals who safeguard Australia everyday! 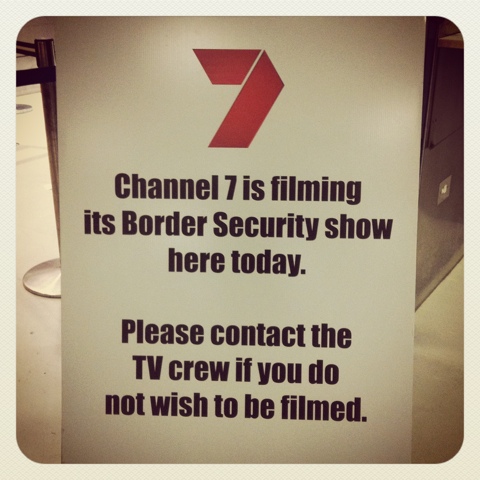