We were on our way to the Sydney Aquarium from Circular Quay, and both kids were fast asleep so when I saw the Max Brenner Cafe just before we hit Wynyard station, I suggested to hubby that perhaps we should celebrate my second born's lunar birthday and take a dessert break. We had hoped the kids would stay asleep so that we could enjoy some couple time over the new dessert menu at Max Brenner's, but their chocolate dessert radar is probably as good as mine, so as soon as the dessert was served, they both woke up.
I had seen pictures of this Praline Meringue Extravagant Puff on Instagram, and it had made me salivate, so even though I had no BFF to share it with, I took the plunge and ordered it.
Why don't the hubby and I share desserts? Well, we have a mutual understanding that either our taste in desserts can be quite different, or we will both want to enjoy the same dessert in its entirety. So no sharing of desserts at the point of ordering, although after we dig in, we are welcome to taste each other's dessert and even swap if we end up not liking what we ordered.
It was one of those days where my dessert was totally a hit and my hubby felt his was not so much.
He was lucky the kids woke up as my first born absolutely loved the chocolate balls that came with his chocolate brownie fudge sundae. We love that they kept the balls off the actual sundae and ice cream and served it on the side, as that made it possible for my daughter to have all the chocolate balls to herself, just the way she liked it (since she was also allergic to milk, it saved me some trouble of separating balls from cream)
I helped myself to his chocolate ice cream which tasted great with my puff by the way, and also his fudge brownies. I loved that all the chocolate was not too sweet dark chocolate type, so it was ultra palatable. The chocolate sundae was served on a very cute wooden block with pictures and words so it was a great sundae to photo.
But it was not as satisfying as my order which was DaBomb! You have to eat it yourself to know what I mean. My only constructive feedback regarding my dessert is how it could have been more extravagantly puffed up and more generous vanilla ice cream beneath. For ice cream suckers like me, the serving I had was not enough for one, much less for 2, since this dessert was recommended for BFF sharing.
So I really enjoyed our little afternoon  distraction as a family in a chocolate haven. The cafe was easy for us to push our giant Stokke stroller into and even when we parked it at the table near the centre of the café, there was lots of space. The baby enjoyed the strawberries on my dessert and quite surprisingly was not impressed by the fudged brownie. Echoes my take on how it was really not too sweet type of chocolate brownie. Those strawberries were fresh and pretty, well washed and beautifully sliced. Portion was also good.
There was an alfresco area outside the café as well, which would have been good for summer.
One other interesting point was when you ask for ice water, they give you a bottle and glasses. The water tasted so good and was so refreshing when you drink it after the desserts. My 3 year old was happily going "cheers!" and commenting repeatedly how "delicious!" her water was (with her chocolate balls)
The café has a restroom too, which was useful for parents like us to take the kids in case they needed to do a pee before dessert.
I've never thought I would enjoy my Max Brenner experience this much, as I haven't stepped in one for more than 10 years. But now that I have been in one, it beats Oliver Brown, Lindt and Gurlain café experiences hands down, so I'm definitely going to go again. 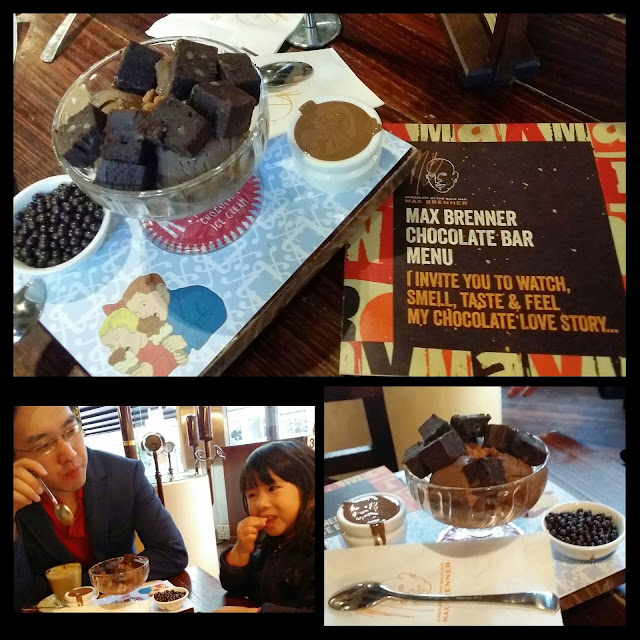 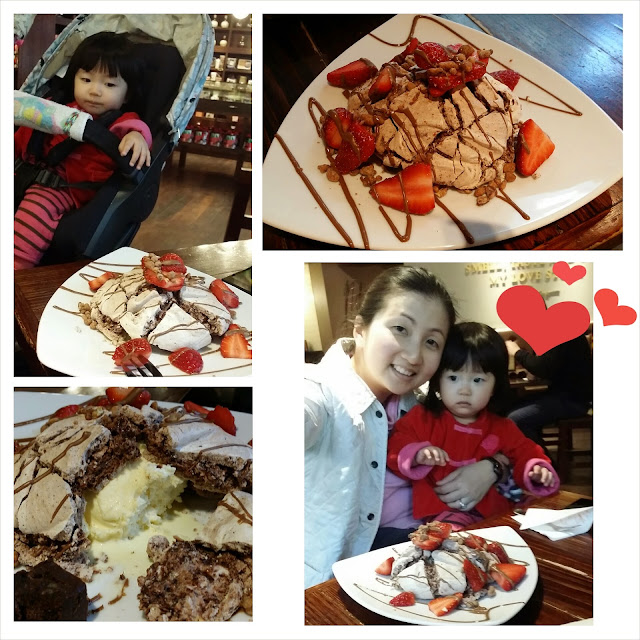